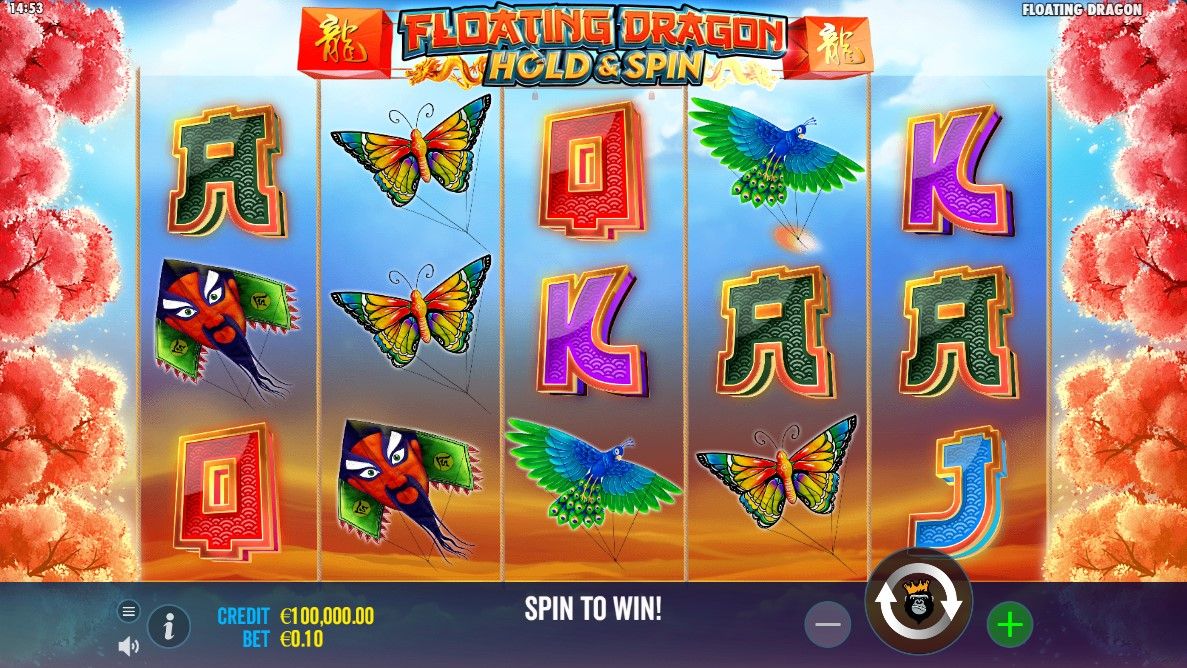 Floating Dragon Hold & Spin is a brand new video slot from Reel Kingdom and another addition to the extremely popular Hold & Spin series that has proven to be incredibly popular with players.

In this Floating Dragon Hold & Spin review, we will give you a detailed and comprehensive look at everything the slot has to offer.

How are the graphics, sounds and animations?

The soundtrack consists of a series of soft, flute-like melodies. This enhances the feeling that players are in an East Asian fantasy world.

The animation of the sunset scenery is stunning and soothing. The gradient of blue, purple and orange is reminiscent of a watercolor painting. Occasionally, a white bird glides by, suggesting that players are flying at least as high as a bird.

The symbols suggest different types of kites, from a rainbow butterfly to a ship with sails full of wind to colorful fish in traditional designs. It is easy to imagine the colorful creatures floating high above the ground, carried by the wind.

Peeking out from one of the icons is a pretty girl with her hair combed into an elaborate hairpiece. She looks at the player with a seductive look.

The dragon symbol explodes out of his reel with his horns and whiskers protruding beyond his borders. His facial expression is crazed and angry, as if he is going into battle.

Overall, the front of this game has a charming aesthetic that is both captivating and calming.

How does Floating Dragon slot work? 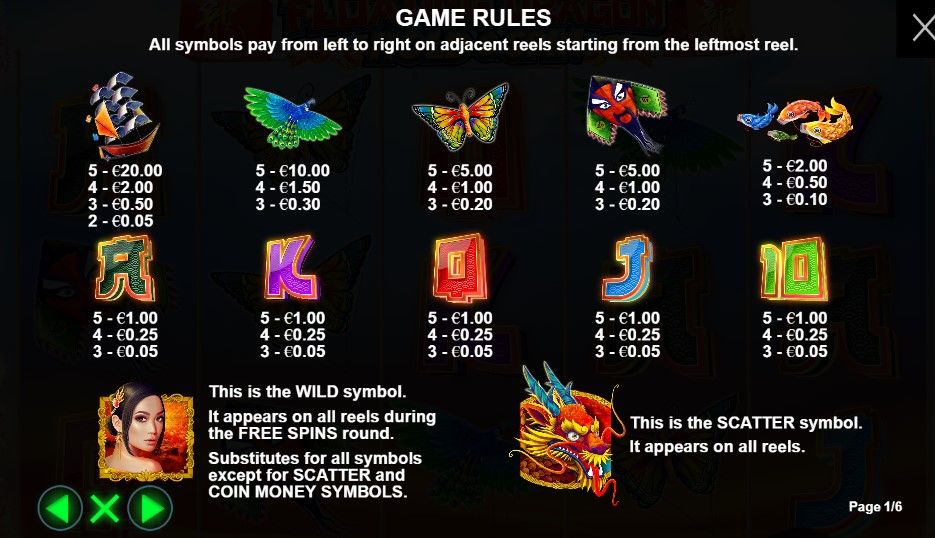 As for the betting options, you can spin the Floating Dragon Hold & Spin slot from as little as 0.10 credits per spin. The maximum bet per spin is up to 250 credits.

As for the RTP of Floating Dragon Hold & Spin, Reel Kingdom has done a good job. The RTP is an above-average 96.71% by default. Find out also Sweet Bonanza.

What are the features of Floating Dragon?

The Wild symbol substitutes for all symbols except the Scatter symbol and the Money symbol. The Wild symbol appears on all reels while players are in the Free Spins round.

The scatter symbol appears on all reels.

During the Free Spins feature, each Wild symbol collects the value of Fish Money symbols.

The maximum win is capped at 5000 times the player's total stake, and if the player reaches this value, the round ends immediately. On every spin from x1 to x20, the Money symbol is assigned a random value.

When 3 money symbols land, the Hold & Spin Bonus feature is triggered. During this feature, the symbols on the middle reel are held and the other reels disappear.

The player starts with 3 re-spins, and any money symbols that land reset the re-spins to 3. The value of all money symbols on the center reel is added to the player's total win.

The diamond money symbol appears on reels 1, 2, 4 and 5 when the player is in the Hold & Spin feature. When this symbol appears, it is randomly assigned a value between x100 and x4993.

We also like the fact that you can win up to 5,000 times your total bet. While that's not as much as some other slots we've seen lately, it's still a decent amount - one that many players would love to clear!

Of course, the free spins bonus round is pretty heavily influenced by classics like Fishin' Frenzy, but again, Reel Kingdom has put their own stamp on things. On the whole, Floating Dragon Hold & Spin doesn't offer anything overly intuitive or creative, but it's a slot that's worth a look in our opinion. Check out Starlight Princess slot.