An overview of the Rise of Olympus

Play`n GO released the Rise of Olympus slot in August 2018. This Greek mythology-themed slot became an instant hit thanks to captivating graphics, animations and exciting features such as free bonus rounds.

The game features three of the Greek gods, namely Zeus, Hades, and Poseidon, that battle for power after defeating their father, Cronus. Each god has a turn to help you out during the game, and each with its own special powers.

It's a 5x5 grid slot with dropping symbols and a great number of bonus features, such as the “Hand of God” feature. Number-wise, there is an above-average RTP of 96.5%, high variance and a 5,000x the stake top prize.

It's a stunningly dramatic slot, but is it as relevant today as it was when it was released? Read on to find out more. 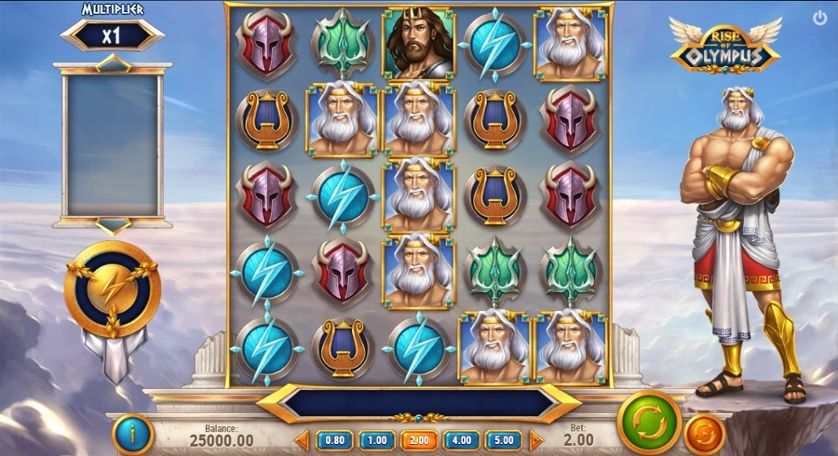 How are the graphics, sounds, and animations?

The first thing that will stand out when the game launches are the beautiful 3D animated Greek Gods on the side of the reels. They move around gracefully as the background changes to adapt to each god’s realm they preside over.

Hades stands proud with his staff in the fiery underworld, which he commands. Poseidon appears in an underwater world, holding his mighty trident at the ready to assist. Zeus, the god of thunder among the clouds with bolts of lightning in his hand ready to lend a hand as you play to clear the grid.

They present the grid on a slab of white granite with remnants of broken pillars at the bottom. The symbols are the faces of the Greek Gods and also a golden Pegasus coin as the wild symbol. While all other symbols are Greek mythology related.

As mentioned before, this slot is dramatic both in animations and sound. We simply cannot find fault with any of the audiovisuals. Once you activate certain features, things pick up with a godly voice speaking from the heavens.

There is a dramatic music change that happens along with scenery that makes things very entertaining.

Highlights of the Rise of Olympus slot

The game was initially released on the 23rd of August 2018 by Play’n GO game studios but has since then been able to keep its popularity as a top gaming title due to being a rather well-designed game.

The game has a fair RTP of 96.5%, which is above the average for most slot games. You can expect some good, fair gameplay with such a decent Return to Player.

With a maximum multiplier of 5,000x times your wager, you can land some pretty good prizes in this high volatility slot.

The betting range is also rather good, allowing both casual and high rollers to enjoy this game. The lowest available bet starts from just 10p, while if you want to hit the top prizes, you can bet up to £100 per spin. 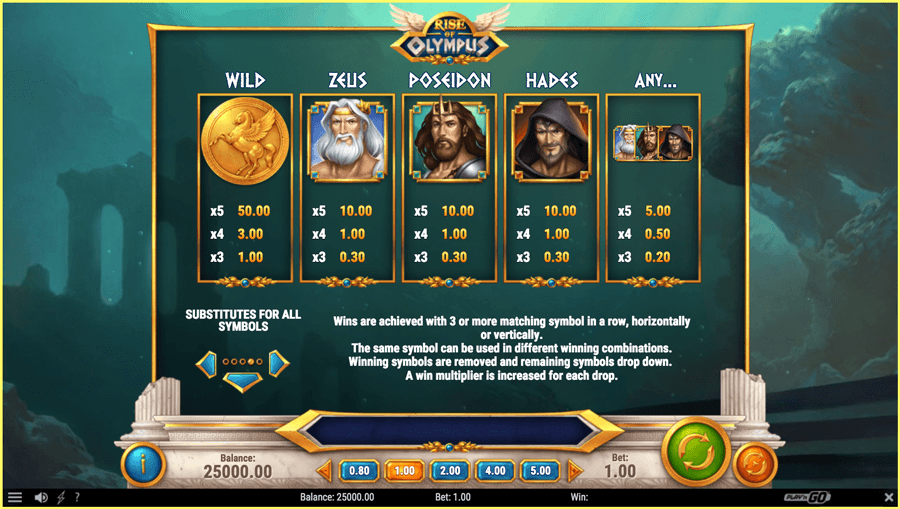 How does the Rise of Olympus slot work?

In Rise of Olympus, there is a 5x5 grid layout with cascading reels, you win by matching up three symbols horizontally or vertically. The winning symbols will then get removed from the reels, and the remaining ones will drop down for more winning combinations.

When you are able to create a winning combo, a wild symbol will appear in the middle of the grid, and a multiplier will increase further wins that get stacked up.

The Hand of God feature can be triggered randomly on non-winning spins and will activate the present god’s powers.

The Wrath of Olympus is another bonus feature that gets when a meter gets filled up by winning combinations that include the symbols of the Greek gods. When the meter is full, you earn a free spin, and the three gods will each then bless the reels with their special abilities.

What are the features of the Rise of Olympus slot? 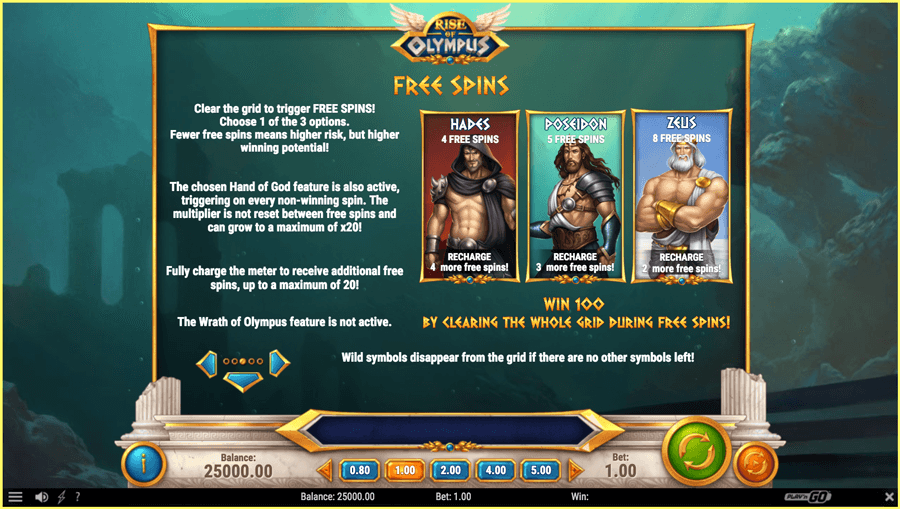 The game features three features, namely the Hand of God and the Wrath of Olympus, which you will encounter most often, especially during the base game. Additionally, you have the free spins feature, which is triggered less often.

The Hand of God

The Hand of God can trigger randomly on non-winning spins, where the currently active God can appear and use their special ability to help clear the grid.

The Wrath of Olympus feature is triggered when a meter is fully charged on the left side of the grid. This is achieved by landing 5 matching symbols, including the god symbols to fill 3 segments, 4 of a kind to fill 2 segments and 3 of a kind to fill a segment. Thereafter, all three of the gods will take turns to bestow their powers on the grid.

Once the grid gets cleared, free spins will be awarded. You will get a chance to choose which God you want active during the free spins round. The ability of the chosen god will then be triggered on the non-winning spins during the bonus round.

Free spins are awarded according to the God chosen:

In addition, the multiplier keeps growing up to a maximum of 20x, and if you manage to clear the grid in the round, you can win up to a 100x multiplier. You can also re-trigger free spins for a maximum total of 20 free spins by fully charging the meter.

Rise of Olympus is a graphically stunning online slot, and the sounds affect really complement the effort put in on the graphics side of things. There is no other Greek mythology slot that depicts the gods as well as this one does.

Play`n GO didn't stop the creative juices flowing there. It follows through the abundance of features and the honestly outright decent math model and top prize. Rise of Olympus is one of those slots that we will be playing for a long time to come and should be on every slot fan's “To Play” list.